News and Events of Pariliana

Wayan's Cooking Classes in French are Online...
Let's connect! There is nothing more simple.

All the details on our website dedicated to cooking classes:
cours-de-cuisine-en-francais-a-bali-ubud.com

We apply all the recommendations of the CHSE certificate.

The CHSE certification (Cleanliness, Health, Safety and Environmental Sustainability) is a certificate, a kind of quality label, issued by the Indonesian Ministry of Tourism to declare that an establishment meets the standard protocol of the New Normal recommended by the government and the WHO.

We are committed to providing a healthy environment for guests and guesthouse staff even during the pandemic.

News published on Facebook on March 20, 2020:
Hello,
Many of you are asking us how it is in Bali with the Corona Virus (aka COVID-19), so I take the pen to thank all those who worry about us and to give some tracks to those who seek information in order to know, for example, whether to postpone or not their next stay…
For the extended family with Ayu and Kadek and all those who work with Pariliana, everything is fine. We are all in good health, except for small colds which make us shudder but which seem mild. We work part time and limit our trips according to the instructions of the Indonesian government.
Indonesia is still at the very beginning of the spread of the pandemic but already the curve is exponential*. We went from 172 officially registered cases on March 16 to 309 on March 19*. Alas, the victims are increasing just as much. However, as there are no Balinese victims yet in the nearby villages, the communities do not really feel concerned and do not really understand the why of the confinement instructions but this is starting to move.
Indonesia has chosen to close its schools immediately for at least 15 days and since Monday for some and Tuesday for others, the children of Bali, like young Europeans, are in "tele-school" and even " tele-exams ”from home.
A state of health emergency is declared until May 29*. Today, 20 March, the borders are closed and, in addition to the entry bans for all those who have stayed in the last 14 days in certain European countries (including France, Spain, Germany and Italy of course) and other countries of the world, now, and for at least 30 days, you need a visa to apply to the Indonesian embassy of your country of residence to cross the Indonesian borders.
So that greatly limits the arrival of new customers. Of course! We are going to go on a diet while the customers come back and cross our fingers so that it goes quickly.
The French Embassy advises all non-resident nationals to return to France quickly before there are no more commercial lines. Only, the prices of plane tickets have increased so much that it dissuades some who think that they are much better here while waiting for the Corona to disappear in Europe but what will it be when the peak will be reached here ??
Hopefully the issue of confinement* will be quickly understood by the Balinese and more generally all Indonesians so that everything gets back to normal as soon as possible and that we have the pleasure of welcoming you very soon.
We think about you. Take care of yourself.
Good confinement to all
Wayan and Nathalie for Pariliana
* Sources in French:
- https://id.ambafrance.org/Risque-sanitaire-coronavirus ;
- https://lepetitjournal.com/jakarta/actualites/indonesie-mise-en-place-restriction-dacces-au-territoire-le-20-mars-276217
- https://www.washingtonpost.com/graphics/2020/health/corona-simulator-french/?utm_campaign=wp_main&utm_medium=social&utm_source=viber
- http://french.xinhuanet.com/2020-03/18/c_138888904.htm

We opened the family suite in the White House and supported the work in front of us with all the possible Balinese zen... It is almost finished and fortunately, with a few rare exceptions you still agreed to stay with us. Thank you :-)

The Pavilion that we transiently called the Villa Pariliana has finally found a name that suits it. Because of its proximity to one of the temples of the village this house is now called "Villa of the temple".

The year begins smoothly with renovations everywhere in Pariliana.
Mount Agung is at least officially quiet and Bali is ready for welcoming again its tourists.
We changed the names of our houses. The "Pavilion" became "Villa Pariliana" and the "Villa" became the "Villa of the village".

June - July 2017:
Inauguration of the rooms of the White House

That's it! The White House and our guest rooms are finally ready and were inaugurated on June 19th...
Here is the new version of our website that presents you these rooms. Good surf!

April-Mai 2017:
Decoration and furnishing of the new rooms 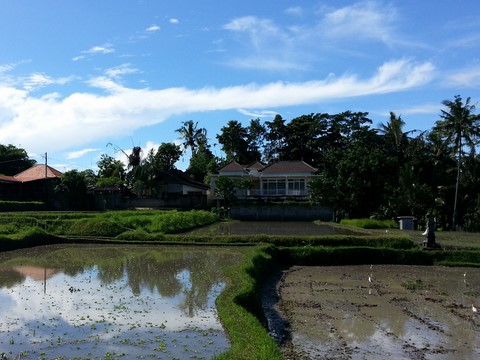 The new building is being finalized and refurbished.
The description and prices of these standard rooms and deluxe rooms will be available soon on our website ...
In the meantime here are some photos as is, to give you an overview.
The inauguration is scheduled for June 2017. 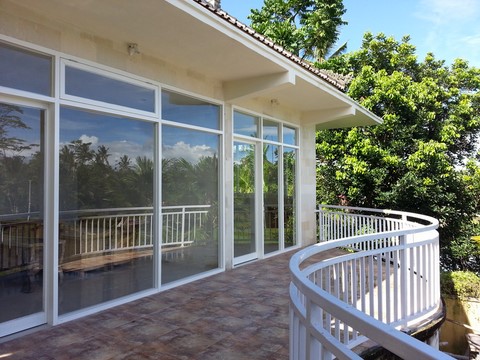 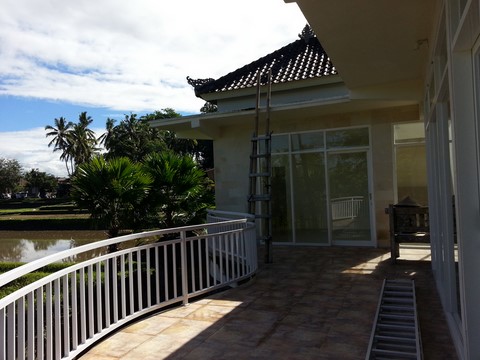 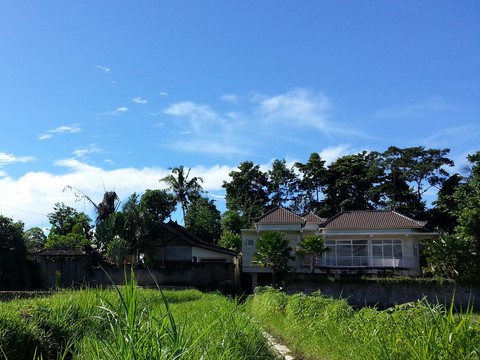 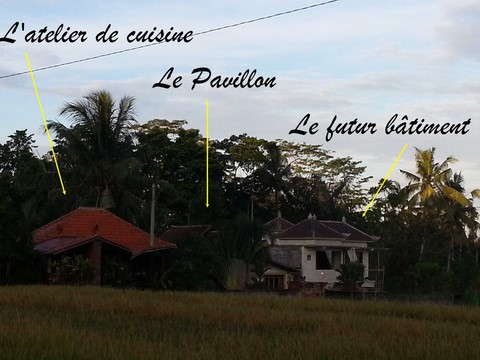 Slowly but surely...
Works are progressing.
The end of the works is scheduled for summer 2017 ...
At least we hope so!

February 2015:
restart Of Construction work of The Future Pariliana Building

We have finally restart the construction of our future big house whose rooms will be able to be rented individually. Patience ... It's a big job!

Januari 2013:
The Pavilion in the Ricefields

Here we are! Everything is ready to welcome you to the Pavilion!
We inaugurated it by renting it for the first time at Christmas to a family of 5 people ...
The section "Description of the Pavilion" finally has new pictures. 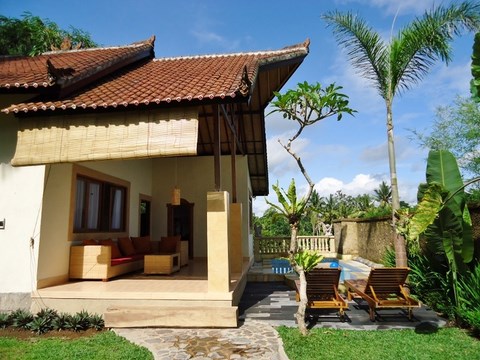 May 2016:
Creation of a Dedicated Website for Cooking Classes 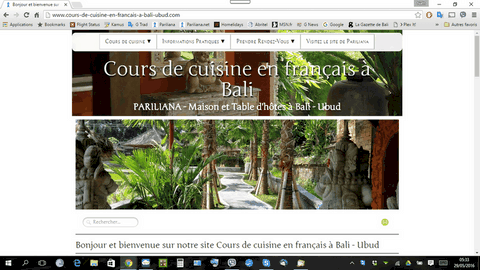 We started the construction of a new big house in front of the rice fields which will include several rooms.
This house will be rented entirely or to the room. In the latter case, the pool and the garden will be shared.
End of work planned for 2016 ... maybe ...